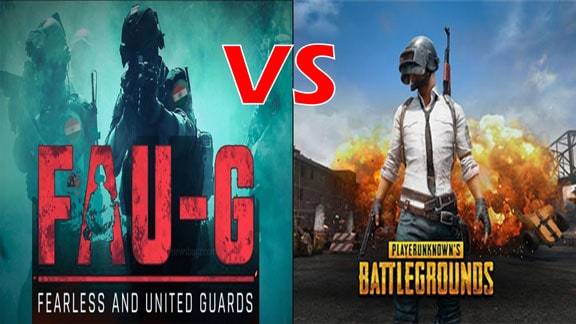 FAUG vs PUBG: After a long wait, the FAUG game has finally been launched in India on 26 January, 2021. This game is being considered as an alternative to PUBG Mobile in India. People are generally calling FAUG as Desi PUBG. But not really. The FAUG game is completely different from PUBG. Yes, but the truth is that the reason for the discussion of the FAUG game is that its launch was announced soon after the PUBG ban. It was expected that the FAUG game would be launched in a competition of PUBG. but it’s not like that.

FAU-G may have come in place of PUBG and both have a base, but there is a lot of difference between the two and here we are going to compare FAUG vs PUBG. What is the difference between both the games, we are explaining you in detail in this article.

Let’s know what are the differences between the FAUG and PUBG in all aspects.

The biggest difference between FAU-G and PUBG is its battleground. PUBG Mobile Game comes with Battle Royale Game Mode, which will provide the option to play as a team and individually to the user.

On the other hand, in the FAUG game, the user has the option to play individually. FAU-G has three game modes. The first is – The Galwan Valley, the second is -Team Deathmatch and the third is -Free for All.

nCore Games has developed the FAUG game. The company is preparing to offer Battle Royale mode and online multi-player mode in FAUG games in the coming future updates. But no announcement has been made to give campaign mode in PUBG Mobile game.

The biggest difference between FAU-G and PUBG is about weapons and the way fight is played between the two games.

In PUBG, people can land with weapons of their choice, whereas in FAU-G’s the Galwan Valley mode you have to land without weapons. Because in Galvan Valley, soldiers of both India and China do not have weapons. The clash that took place in Galvan Valley also resulted in a hand-to-hand fight.

The FAUG game initially features a hand-to-hand fight mode with some weapons such as knives, axes. However, the shooting option in Battle Royale mode of FAUG game will be seen or not it is not yet revealed by the company.

There is also a huge difference of command between FAU-G and PUBG. In the FAU-G, the character can neither hide nor flip, jump, hide or kick of his own choice. Everything is in automatic mode. Whereas in PUBG, the fight is done by planning and a proper strategy. The control of the player is in the hand of users.

Sound is the most important part of any game. Apart from music, people playing games in PUBG can also communicate with their teammates as well as with the enemies and can also plan attacks. While this option is not available in FAU-G yet. In the coming time, these updates may be included.

In PUBG there are different locations and maps which are subject to change and are imaginary locations. While the story line of the FAUG is based on the Galvan Valley, a site of war between India and China. It is a real location, which is the border area of India and China.

The FAUG game has been launched for Android users in India. It can be downloaded from the Google Play Store. But the FAUG game is not available for iOS version. PUBG Mobile India has not been launched yet. But its global version is available.

Last but not least, keep in mind that this is the first update of FAU-G. In the future, more features can be added to FAU-G. In such a situation, it is better to have something than nothing.

What Are OTP scam? | How To Avoid OTP Fraud?