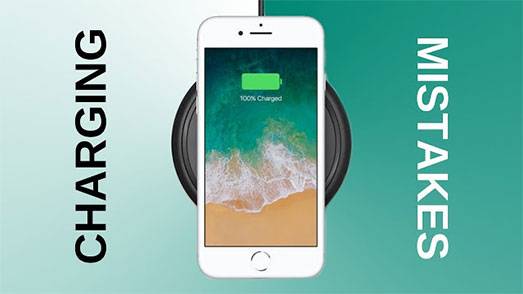 Most of the people makes a lot of mistakes while charging smartphones, due to which the battery of the phone deteriorates quickly. Now a days, we use Smartphones from sending messages to playing videos, music, gaming, calling and much more. In such a situation, due to excessive and rough usage, the battery of the mobile is depleted and it needs to be charged.

But during charging, people make some small mistakes, which causes great damage to the phone’s battery life.

So today we will tell you about the most common mistakes that you are making unknowingly while charging your Smartphone.

1. Charging Mobile Phones With Another Charger

Many times people start charging their mobile phone with another charger. Doing so increases the chances of battery malfunction because a particular charger is designed for a particular mobile phone according to the specifications & features of the phone.

Charging with another phone’s charger affects the battery of that smartphone though the phone is charged because of the difference of the current supply.

So always remember to charge your phone with the charger that comes with it. This will not damage your device’s battery.

2. Not Removing The Cover While Charging Phone

Most of the people charge their smartphones while putting phone cover over it. This should not be done, as this puts pressure on the phone’s battery.

Also heat dissipation is poor due to back cover resistance and this increases the chances of device malfunction due to excessive heat.

So while charging, remove the phone cover and replace it with a thin cloth. This will not harm the display, internal components and battery at all.

Most people use the phone throughout the day and put it on charging at night and go to sleep. Doing this puts pressure on the phone’s battery and increases the risk of getting blasted.

So do not forget to switch the charger off while going to sleep at night.

By doing this, the battery of the phone will not deteriorate quickly and the chance of battery getting explode is minimum.

Also Read: How To Transfer Contacts from Android to iOS?

Many times people use the third party Apps to charge the phone quickly because they thought that these third party fast charging apps will charge their phone like the lightning charger does.

But if your phone is not designed for fast charging then these apps won’t work.

This should not be done, as these apps are constantly active in the background, which costs the battery.

So these are the some common mistakes while charging Smartphone people do. If you follow these steps then your smartphone’s battery life will increase definitely.

If you find this article helpful then do let me know in the comment section.

How To Identify Fake Products While Shopping Online