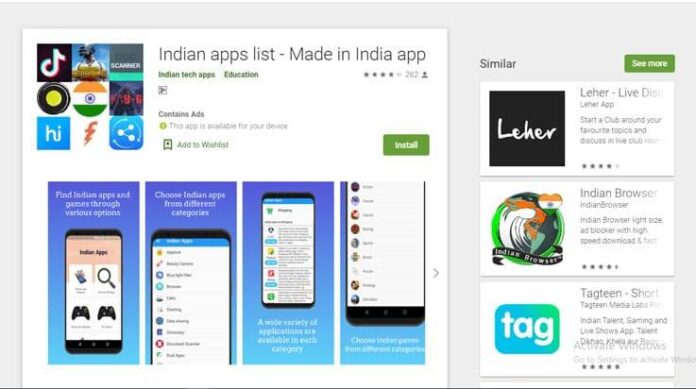 The border dispute between India and China has the most important impact on the Chinese app like Tiktok, PUBG, Cam Scanner etc. Chinese apps which were flooded with Indian market, now their dominance seems to be decreasing rapidly. India has already banned more than 200 Chinese apps. This is because of the increase in the local and indian app developers since the lockdown. Alongside this, the Indian government is additionally promoting the made in India apps.

In this process, the Indian Space Research Organization (ISRO) has recently partnered with MapMyIndia company. ISRO announced that it will soon announce an alternate app which may replace Google Maps.

A few days ago, the Railway Minister was seen promoting Twitter’s alternate native app ‘Koo’ and this app was also advertise on Twitter.

Similarly, there are many apps whose development are either under progress or they need been introduced. Now it’s to be seen whether Indian apps can compete with foreign apps like WhatsApp and Google Maps, which are the most popular apps in India.

There are many alternate Indian apps whose development is either under progress or they need been launched. Here we are providing you with information about the top Made in India apps which may replace foreign apps like WhatsApp, Google maps, Twitter etc.

The National Informatics Center (IMC) has launched the Indian version of WhatsApp ‘Sandes‘ app in India. So if you’re worried about the privacy policy of WhatsApp that they recently changed then now your worry is getting to be over. The Sandes app is available for both iOS and Android users. There are many such features found within the Sandes app, which are exactly similar to WhatsApp’s feature.

Its most unique feature is that it also provides end-to-end encryption just like WhatsApp. Talking about its other features, it includes contact sharing, message styling, message tagging, backup and restore, group chat, group conversion, message broadcasting, audio and video calling.

Efforts on the self-reliant India initiative have been intensified within the country. The Koo app is being called the desi version of Twitter. It’s available for both iOS and Android and also for the web browsers. Almost everything which can be done on Twitter is completed here.

Apart from this, Tooter is additionally named within the indigenous social network. Here you’ll create short messages by creating an account called Toots.

Google Maps has eased many problems of the people, but now an indigenous app has come up to compete with Google maps. This indigenous app is going to be from Map My India, which is an Indian App development company.

The Department of Science of MapMyIndia has entered into an agreement with CE Info Systems Pvt Ltd, a geospatial technology company, which is functioning to substitute Google Maps in the coming time. This app will guide the users through the Indian Regional Navigation Satellite System (IRNSS) called NavIC. NavIC has also been developed by ISRO.

Based on this data, MapMyIndia will provide service to the people during a digital way through the app.

FAU-G, a mobile game app believed to be Desi PUBG, has been launched in India on 26th Jan, 2021. This game is available for download from Google Play Store.

FAU-G, aptly named Fearless and United Guards, is an action game created by Bangalore-based game company nCore Games in India. it had been announced in September 2020, soon after the govt of India imposed a ban on PUBG Mobile and it had been finally released on Republic Day, i.e., on 26 Jan, 2021.

MX TakaTak is much more similar to that of TikTok app and has all the features which was available in TikTok for making short videos of 15 seconds to 60 seconds. This short video app which is owned by Mumbai-based MX Media company offers an identical experience as that of the banned Chinese app TikTok.

This app features a range of video editing tools, filters & stickers and a fast share choice to share the content on other social media platforms. Using this app, you’ll be able to make short video from 15 seconds to 1 minute a bit like TikTok.

The app is out there for downloading for both Android and iOS platform and also supports regional languages like Gujarati, Marathi, Punjabi, and more.

Using this app you can share your files and documents with anyone in no time.

So these are some of the made in India alternative apps of foreign apps. But its not the end. There are many more Indian apps which has been developed within the country after the ban of Chinese apps like Mitron App, Moj, Roposo, Jio Browser, Jio Chat, Smart Share etc. These app’s functioning are somehow similar to that of foreign apps.

What do you think about these Made in India apps?

Will they be able to compete with the foreign apps?

What is Telegram | How It is Different From Other Messaging Apps?

WhatsApp vs Signal vs Telegram | Which Is Better and Secure Messaging App?

Want To Protect Your Mobile From Hackers, Then Follow These Tips